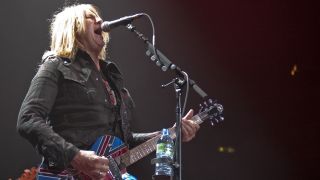 Joe Elliott's Down N Outz have released a video for their cover of the Mott the Hoople classic Rock And Roll Queen.

The original song featured on Mott the Hoople’s eponymous debut album, released in 1970, and was written by guitarist Mick Ralphs. It was later used as the title track of the band’s first compilation album in 1972.

“I’m not trying to better the songs”, says Joe Elliott. “I’m just giving them a coat of paint, putting them out there for my generation to hear, and if anybody who’s a huge Mott the Hoople fan gets to know about this, they can at least go ‘Fair play — at least he’s keeping the music alive, so I’ll check it out’, and that’s all you can really hope for.”

Following on from 2010 debut My ReGeneration (given away in Classic Rock, you’ll remember), The Further Adventures Of… delves further into the Mott catalogue, breathing new life into overlooked numbers like Marionette, One Of The Boys and Rock And Roll Queen itself.