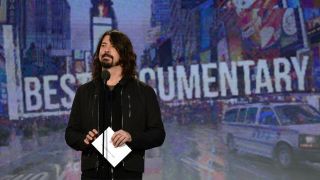 Dave Grohl is to present and produce his own TV series for US cable channel HBO.

Expanding upon the ideas explored in Grohl’s acclaimed Sound City documentary, the series will see the Foo Fighters’ frontman visit, and record music at, some of the world’s most iconic recording studios. Grohl will also conduct interviews for the series, speaking with some of the artists who have recorded at each facility.

It is expected that the as-yet-untitled series will air as part of HBO’s winter schedule.