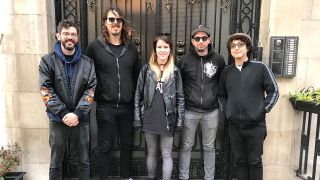 Chicago prog rockers District 97 have released their own tribute to Bill Bruford and the late Allan Holdsworth by releasing a video of their cover for Fainting In Coils. The song is taken from the debut 1979 Bruford band album One Of A Kind, which saw the former Yes and King Crimson drummer hook up with guitarist Holdsworth, former Hatfield And The North/National Health keyboard player Dave Stewart and bassist Jeff Berlin (the same line-up who'd appeared on the drummer's first solo album Feels Good To Me a year earlier).

"Bruford's 1979 release One Of A Kind is one of my father's desert island discs, and was thus an album I heard umpteen times throughout my childhood," drummer Jonathan Schang explains to Prog. "In that sense, getting to play the whole thing live and capturing it for posterity really felt like coming full circle. In my teen years, UK's debut was a pivotal album for me, so it's nice to round out this collection with a couple tracks from that record. The response from our Inside The Vault Club Keyholders to this limited-edition release has been phenomenal."

As Schang says, the song was originally released through the band's Inside The Vault subscription service which they launched three years ago and which features exclusive audio and video material available to subscribers every month. It's from a limited edition live CD Two Of A Kind:  A Tribute To Bill Bruford And Allan Holdsworth of which there are 250 copies available to Vault members.

District 97 released their fourth album Screens last year. You can find out more about the Inside The Vault Club.