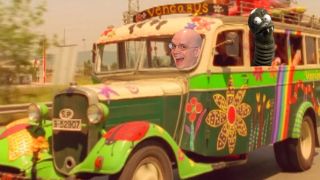 Devin Townsend has revealed he’s recorded a cover of Vengaboys hit We Like To Party!.

And he has recorded a version of We Like to Party! (The Vengabus) with his Casualties Of Cool bandmate Che Aimee Dorval and long-time collaborator Anneke Van Giersbergen.

But the “destructive” cover version won’t be released until Groovilicious Records grant him the rights to do so.

Townsend tells TeamRock Radio: “I love Barbie Girl by Aqua. Vengaboys, We Like To Party, I remember when I heard that song it made me cry, I liked it so much.

“I recently did a version of it with both Che and Anneke but I can’t release it yet because we can’t get the rights for it.

“At the end it’s really destructive, as you would imagine.”

Townsend was speaking to TeamRock Radio for an upcoming Soundtrack Of My Life feature, which will air over the festive period.