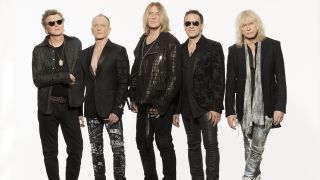 Def Leppard have released their entire back catalogue on music streaming services for the very first time – and announced a UK and Ireland Hysteria tour for December.

A dispute over royalty payments between the Sheffield outfit and Universal Music – who own the rights to the original recordings – has meant classic albums such as Pyromania and Hysteria have never been available on sites such as Spotify and Apple Music… until now.

Frontman Joe Elliott explains: “We tried to do a deal many years ago, but it didn’t work out, so we just waited and bided our time.

“Record labels, or any kind of institution like this, keep the same name, but every 18 months you can have totally different people.

“We were just very fortunate that the people at Universal at the moment were very onside to doing this deal. We sat down with them and basically just batted the stuff back and forth until we all settled on what we thought was a fair deal.”

The band have also announced an 11-date UK and Ireland tour which will take place in December and will see them performing their 1987 album Hysteria in its entirety. They’ll be supported by Cheap Trick on all dates.

Tickets will go on general sale from 9am GMT on January 26.

A full list of Def Leppard’s material which is now available on streaming platforms can be seen below along with their December tour dates.