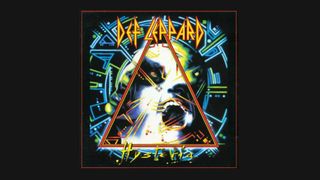 Drummer Rick Allen lost an arm during the making of this album. There were reports that original producer Jim Steinman spent most of the time redecorating the studio, before being fired. Things were so far behind schedule that Def Leppard had special T-shirts made up taking the piss out of themselves. And the budget rivalled the GDP of a small country. This is Hysteria, a record many feared would finish the band’s career. Instead, it sold close to 20 million records worldwide. And, while it was the music that caught the imagination, the album’s sleeve was also fascinating, and just a little surreal.

The man behind it was Andie Airfix, who began a long association with the band in 1987. His list of collaborations includes working with Led Zeppelin, Metallica and Judas Priest. But he got the Hysteria job thanks to the Thompson Twins. Leppard co-manager Peter Mensch saw his artwork for the Twins’ Here’s To Future Days (1985) and thought he was the man for the job.

“It was a typical Def Leppard brief,” says the designer. “I was given virtually no information. The album was originally going to be called Animal Instinct, so I created a sleeve around that. I was into the idea of having something turning around to look at you, so that illustration had an eagle, a lion and a shark which all blended into each other. Then they changed the title to Hysteria, so we had to totally rework things.”

The new cover had a distorted face within a triangle, almost melting into a complex background, something that owed its genesis at least in part to an early version of the Leppard logo. “The triangle was a recognisable image for Leppard fans, so that seemed a good starting point. Then it was just a case of creating something that was frightening in some respects. The full-on face we used is almost human, but the side view isn’t, retaining the animal aspect. The idea was that this thing turning around to face you made it scarier.”

The whole sleeve concept wasn’t exactly rushed, as – in the end – Airfix had two years to fine-tune the design, constantly staying in touch with the band as the recording sessions slowly progressed.

“They trusted me; their input was basically limited to saying if they liked an idea or not. Maybe there were a couple of people who didn’t like it quite as much as the Pyromania artwork, but in the end they all recognised it was a strong cover, and really suited what the band were trying to achieve musically.”