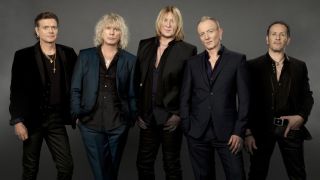 Def Leppard frontman Joe Elliott says a busy 2015 tour schedule and “an unprecedented amount of offers” to release their 11th album have pushed the project into later in the year.

Songwriting sessions for the follow-up to 2008’s Songs From The Sparkle Lounge early last year yielded the beginnings of 15 tracks, which guitarist Phil Collen described in September as “really heavy and very melodic.”

Between live commitments and guitarist Vivian Campbell’s stem-cell treatment for cancer, the group resumed studio activity in December, with drummer Rick Allen recently revealing the majority of 16 songs are close to completion.

Leppard were planning to have the record ready for release in time for the spring 2015 touring season, but Elliott now reveals to Billboard the project has been moved back due to “an unprecedented amount of offers from various different people to release this record, which we weren’t expecting and has changed the whole dynamic of how we want to put this record out.”

The singer says Leppard are still “weeding through” the offers but is confident the album will be out “absolutely this year.”

Elliott says: “The important thing is we make a good record. I don’t think people are queuing around the block to buy a Def Leppard release right now; if they’re doing it for anybody at all it’d be Taylor Swift and Katy Perry.

“But for us it’s really important that we keep the high quality we’ve always tried to deliver and we don’t let ourselves down. We’re never gonna be the kind of band that goes, ‘Well, it doesn’t matter, nobody buys records anymore so let’s just piss one out in a month.’ That’s not our style. It never will be.”

Elliott predicts the new music will sound both familiar and fresh when it’s finally out.

“It’s very varied. It sounds like Def Leppard, but it sounds like Def Leppard stretching their wings a little bit. There are a couple of songs tied to our DNA, instantly recognisable as us, and some of the stuff that’s not so much like that and represents who we are now, a band that’s in their early to mid-50s, the kind of music they should be making without it sounding old and farty. We’re not trying to write 24-hour party songs at our age – that would be silly.”

He adds: “The good thing is, we’re not tied down. Like, when you say AC/DC, you kinda know what you’re gonna get. We’re more in the Queen ballpark where you can have a slow thing and you can have a full-on rock song on the same record and they go side-by-side. That’s where we’re coming from on a lot of this stuff.”

Def Leppard have a full live schedule ahead. They’ll perform a Canadian tour in April, will play some European shows in May and June and then launch a four-month North American trek with Styx and Tesla in late June, with shows wrapping up in early October.