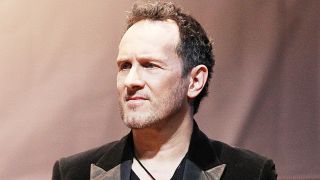 He underwent a radical form of surgery to deal with Hodgkin’s lymphoma, which was first diagnosed last year and returned after doctors thought it had been eradicated.

He originally believed he’d be stuck in hospital until the end of the year, with bandmate Joe Elliott reporting he was in “lockdown” conditions because of the risk of infection during the procedure.

But last night Campbell said via Facebook: “Home… So glad that’s over. Time to recover, recuperate and grow some hair.

“Thanks for all the love you’ve sent – much appreciated! Normal service will be resumed shortly.”

Def Lep played a number of gigs with Steve Brown in Campbell’s place, after deciding to honour commitments rather than cancel.

Elliott recently said the band are planning a “big push” for 2015, likely to include a “basic and raw” album without any signature “80s ballads.”