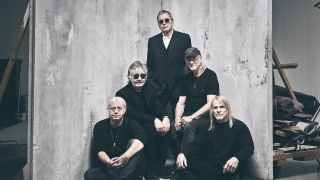 Deep Purple have shared a video for their new single Throw My Bones.

It’s the first taste of material from the band’s upcoming studio album Whoosh!, which is set to arrive on June 12 through earMUSIC on CD, LP, 2LP/DVD and limited CD/DVD mediabook.

The DVD editions will include an hour-long feature showing bassist Roger Glover in conversation with Whoosh! producer Bob Ezrin along with Deep Purple’s full live performance from Hellfest in 2017.

The video for Throw My Bones is described as pushing the “boundaries of time and place. It is an invitation to take a step back and see the bigger picture, a call for action and an invitation to observe the planet and the current situation on Earth.”

News of the follow-up to 2017’s InFinite came to light last month, with Guitarist Steve Morse saying: “We've included everything that made the whole band smile, including Bob Ezrin. We've always enjoyed making music and having the incredible luxury of a loyal audience.”

As for the title, frontman Ian Gillan said: “Whoosh is an onomatopoetic word that, when viewed through one end of a radio-telescope, describes the transient nature of humanity on Earth. And, through the other end from a closer perspective, illustrates the career of Deep Purple.”

Deep Purple are scheduled to head out on tour from the end of May in support of the album. At the time of writing, the tour is still going ahead.

Deep Purple: Whoosh!
Deep Purple will return with their new album Whoosh! in June. It'll be the follow-up to 2017's InFinite and include the lead single Throw My Bones.View Deal