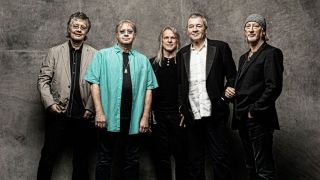 Deep Purple bassist Roger Glover has confirmed that he and the band have finished recording what will be their 20th album.

He confirms the mixes are done on the follow-up to 2013’s Now What?! and says they’re eyeing an early spring release next year via earMUSIC.

Glover says in a video message: “I have a little bit of news for you – not a lot, but some. I know a lot of you have been waiting for this new album of ours. Well, it’s nearly there.

“We recorded it in Nashville in February and we’ve been working on it and the mixes were finally done a couple of months ago.

“It’ll be out sometime next year – early spring. I’m in Hamburg and it’s the first playback to some of the distributors and the record label chiefs and it’s very exciting.”

He continues: “I know you’ve been very patient – and so have we. We tour a lot and it’s difficult to actually get some time in the studio sometimes. But the album is finished.

“We haven’t got a title yet. We’re still arguing about that – as we do about everything. But for you, who have been waiting for so long, it won’t be much longer.”

Earlier this year, Deep Purple were forced to reschedule two shows in Sweden after drummer Ian Paice suffered a mini-stroke.