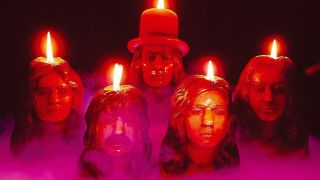 Much was riding on Burn, the 1974 Deep Purple album that marked the debut of what became known as the Mk III line-up. After vocalist Ian Gillan and bassist Roger Glover left the band in 1973, primarily following argy-bargy with guitarist Ritchie Blackmore, there were plenty of doubters. Gillan’s voice had defined Purple’s technical hard rock sound every bit as much as Blackmore’s classically-influenced style. But instead of playing safe, the band took big risks.

First they recruited Trapeze bassist and vocalist Glenn Hughes, then added unknown English singer David Coverdale. Hughes had an impressive high-pitched rock wail, while Coverdale was capable of belting out numbers with a clear blues inflection. This gave the band not one, but two new dimensions. Add in the fact that Hughes loved funk rhythms and Purple were suddenly painting with a much broader palate of colours. Burn gave the band a thrilling new lease of life and has stood the test of time as a bona-fide rock classic.

A curious proggy album closer sees Jon Lord enjoying himself as he layers a number of synths over a marching rhythm. Ritchie Blackmore weighs in with an intense solo, and while the whole thing isn’t exactly disagreeable, it’s quite comfortably the least engaging moment on an exceptional album.

7. Lay Down Stay Down

Not the greatest song at its core, but the enthusiasm, cohesion and technical ability each band members brings to the table still makes it worth a listen. Glenn Hughes is on fire here, working as hard as you please to deliver his vocals with fierce, soulful conviction. David Coverdale holds his own and Blackmore solos like his life depends on it. This track would be a lesser band’s highlight, but has to be regarded as one of ‘Burn’s weaker moments.

A cautionary tale of what can happen when you’ve been on the booze all night and you need someone to “roll me over slowly”. The somewhat throwaway lyric is trumped by an irresistibly groovy blues rock vibe where Lord serves up some tasty and tasteful piano licks, then follows up with a killer bar-room solo. Blackmore sounds like he’s having too much fun, and Hughes and Coverdale trade vocals with obvious relish.

Purple reach back to the ‘60s to produce an insistent, slightly trippy verse that owes a large debt to the Cream classic, I Feel Free. While it’s easy to hear where the song came from, the band are then keen to move off in a different direction, indulging themselves with what feels like a jam session held together by some astoundingly rhythmic drumming from Ian Paice. This is the sound of master craftsmen at work.

One of the album’s signature tunes, this is a slow blues groove delivered by Coverdale alone, where the singer reaches deep into his psyche to pull out the scars left by past emotional traumas and lay them all out on tape. It’s a vocal tour de force and, for once, the band rightly hold back the playing the better to serve the song. Blackmore matches the emotional intensity with a lovely understated solo. Blasphemy possibly, but I could do without the 40 odd seconds towards the end where the tempo speeds up.

A rip-snorting album opener that is rightly hailed as a rock classic. Blackmore’s riff is a killer, Lord echoes it with a warm, fat organ sound, Paice is at his explosive, technically dazzling best, and Hughes and Coverdale set their stall out as vocalists who have nothing to fear from the competition – even if that competition happens to be called Gillan. Simply gigantic!

Starts with a lovely simple organ riff before Coverdale takes charge of this gorgeous sexy stomp and shows the full range of his vocal prowess. It’s easy to forget just how well he used to control his voice, effortlessly creating light and shade, before the tiresome rock animal took over. Hughes takes a later verse here and shows what a superb singer he is in his own right. It’s impressive to hear two such major talents reining in their egos for the sake of the song. And what a song!

Built on a super fat funky riff that bears more than a passing resemblance to Stevie Wonder’s Superstition, this is as ear-wormy as it gets. This track is the best example of what Deep Purple were suddenly capable of producing with their new members on board. The Mk II version would never have pulled off something this damned insistent. Vocal-wise, Coverdale offers the soul, Hughes delivers the passion and the combination is perfectly blended. It’s nice to hear voices so high in the mix on a rock album. Special mention in dispatches for Lord’s psychedelic synth interlude. Freaky!