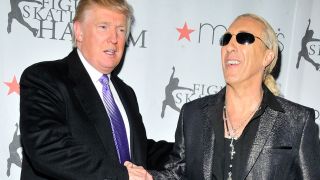 Trump has said in the past that he would build a wall along the Mexican border to stop people entering the US, and called for a “total and complete shutdown” of the country’s borders to Muslims in the wake of the San Bernardino terrorist attack in December 2015.

But Snider says these are policies he just can’t agree on.

The vocalist tells Radio.com: “My ancestors who were granted asylum here in America – they were immigrants. And if they hadn’t been allowed in and granted asylum, I would not be here.

“And I think people forget too quickly that this is America. All of our families, unless you’re Native American, come from immigrant families. And it wasn’t too long ago when every one of our families was the odd man out, and they were the people that were being shunned.

“That’s not what this country’s built on, and I can’t stand behind that.”

Snider previously allowed Trump to use Twisted Sister classic We’re Not Gonna Take It at his rallies – but later asked him not to when he found out “his political stance on a number of subjects.”

Snider adds: “My band was uncomfortable. Well, they had mixed feelings. Some are pro-Trump, others are not pro-Trump. But it was like, ‘Hey, we’re all being defined by this.’ And that’s not what the song was about.

“The song was sort of a song for everybody, not just for one voice.”

Other rock and metal artists who have come out against Trump’s policies include Slayer’s Kerry King who called him “the biggest biggest liar I’ve ever seen in politics.”

Limp Bizkit’s Wes Borland told Trump supporters to stop following him on Instagram, while the estate of late Beatle George Harrison, Queen, the Rolling Stones and Aerosmith have all asked him to stop using their songs at his political rallies.

Snider’s solo album We Are The Ones was released last month.