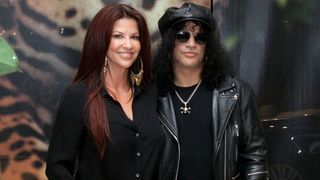 Slash ex Perla Ferrar has hit back at the guitarist’s claims the couple were never married.

Earlier this week, Slash indicated they never legally tied the knot and, as a result, Ferrar had no right to a share of his wealth following their divorce in 2014.

Slash said he discovered she was still married to previous partner Carlos Marty when they later applied for dual citizenship for their son, Cash. The forms for a final judgement were reportedly not filed properly, according to TMZ.

But in a new TMZ video clip, Ferrar says Slash’s claims are false and they’re causing distress to both her and the couple’s children.

She says: “It’s very hurtful to me and disrespectful to our children, and I gave him 18 years of my life. It’s a bit unexpected and humiliating to our family.

“It’s quite sad – we got married two times.”

Ferrar attended Guns N’ Roses’ reunion show at April’s Coachella festival in California. But she says “it really wasn’t what we expected it to be.”

She adds: “It should have been a more celebratory thing for our family because their father was back with his band and playing at Coachella – but that’s when I realised there was a lot of tension and bad blood between Slash’s camp towards me.”

When asked if she spend time with Slash at the festival, Ferrar says: “I certainly didn’t but the kids were able to see him. The day their dad played they got the VIP treatment.”

Ferrar, who previously insisted their split was “amicable” says they’d hired a lawyer in 2009 to finalise the divorce, and got a judge make it retroactive to 1994.

Her case could also be upheld under a law for “putative spouses,” which means if people have a reasonable belief they are married, a judge can decide to legally divide their assets.

Slash filed for divorce from his wife for the first time in 2010 – but withdrew the case after they worked things out two months later.