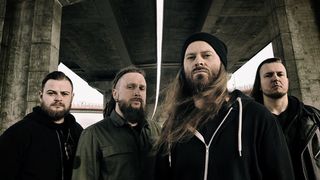 Warning: Contains graphic detail and may upset some readers.

All four members of Decapitated have been accused of gang-raping a woman following their show in Spokane, Washington, on August 31.

It emerged yesterday that Waclaw Kieltyka, Rafal Piotrowski, Michael Lysejko and Hubert Wiecek had been arrested in Santa Ana, California, and held on charges of first-degree kidnapping – now further allegations against the Polish outfit have emerged.

The Spokesman Review has obtained newly released court papers which accuse the band of gang-raping a woman in the bathroom of their tour bus after the show at The Pin in the city.

The alleged victim and her friend told local police that they were invited on to the band’s tour bus, where one woman “described being excited to be on the bus, and then one of the band members began grabbing her breasts,” court documents say. “He was later identified as the drummer, Michal Lysejko.”

The newspaper reports that the papers go on to say that the same woman “was uncomfortable and said the band members began speaking to each other in Polish. She described the ‘vibe’ in the bus changed, and one of the members began looking at them like they were prey.”

Court documents say the woman told police that Piotrowski began kissing her and she attempted to push him away “but he grabbed her arm and spun her around to where she was facing the sink and mirror in the bathroom. She saw in the mirror and out of the corner of her eye each of the band members taking turns raping her.”

Following the alleged incident, the woman called police and was found two miles from the venue. She was taken to hospital where she underwent a sexual assault examination.

Police say she had “significant bruising to her upper arms consistent with being restrained” and “small abrasions to her knuckles that were scabbed over.”

The woman reported that she “was digging her fist into the wall to try and distract herself from what was happening.”

Kieltyka told police that he saw Piotrowski and Wiecek engaged in a sex act with the woman in the bathroom and agreed to have a DNA swab collected as evidence.

Court documents say that Piotrowski “admitted there was a party on the bus and (the women) were present. He then requested an attorney and a translator refusing to make any further statements.” He declined to give a DNA sample.

Wiecek said the women had been on the bus, but reported that he “sat on the couch and did not see what was going on.” The court papers add: “He then said he needed a translator so he did not misspeak. He also said no one was forced to get on the bus. He then said he did not recall what happened.”

Wiecek also declined to give a DNA sample, while the court papers also say that Lysejko “made no comment other than he did not know who the girls were” when shown a picture of them. “He said he would not talk without using a translator.”

Following the latest allegations, the band’s lawyer Steve Graham said: “Decapitated plan to fully fight the allegations that are brought against them and we are fully confident that the other side of this story will be heard.”

All four members are currently being held at a Los Angeles County jail awaiting extradition to Spokane.