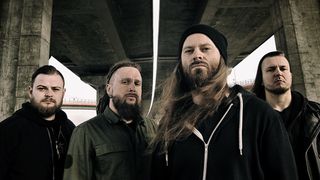 All four members of Decapitated have been arrested on suspicion of kidnapping a woman following their show in Spokane, Washington, on August 31.

The alleged incident is said to have occurred after the Polish outfit’s performance in the city, with the Spokesman-Review reporting that the band were arrested over the weekend in Santa Ana, California, after a woman came forward to police.

Waclaw Kieltyka, Rafal Piotrowski, Michael Lysejko and Hubert Wiecek are currently being held at the Los Angeles County Jail on charges of first-degree kidnapping and the case is under investigation by the department’s Special Victims Unit.

Police believe the woman attended the concert at Spokane’s The Pin, where the band played with Thy Art Is Murder, Ghost Bath and Fallujah.

Decapitated have hired attorney Steve Graham who says: “There is another side to this. We have witnesses that can testify to the fact that the accuser came to visit the band of her own free will and left on good terms.”

Graham admits he’s concerned that the band will “languish” in jail for weeks as they await extradition back to Spokane – but reports that they will cooperate with authorities and not fight extradition.