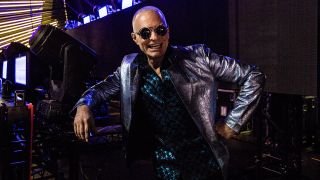 Diamond Dave was speaking with Missouri radio station KSHE 95 about his 2020 Las Vegas residency when he was asked if he had to ask permission from his Van Halen bandmates to play the band’s older tracks.

Roth replies: “No. I wrote the songs. I wrote every word you heard, every syllable, every melody. I structured even the guitar solos on that first album.

“Why do you think the solos later changed so radically? I sang the solos for Jamie’s Cryin' and Runnin' With The Devil etc…"

As for his upcoming Vegas dates with his backing band Horses Of God, Roth says: “We do not sound like Van Halen live – you have not heard this.

“Van Halen live is lead, bass, drums – here, we start with three or four guitars and we bring it with an unforgiving attitude.

“We're not up here strumming with the devil, this is not some tribute band. I wrote those songs, structured those songs.

“I designed the backgrounds on the stage. I came up with the album covers. I thought of the stripes on the guitar. I’m the one who said, ‘Call it Van Halen.’ And we take it with that attitude. We ain't talking about love.”

Roth will hold his residency at the city’s House Of Blues in January and March next year, and along with Van Halen tracks, Roth will also sprinkle the set with some of his best-loved solo work.

Van Halen: The Japanese Singles 1978-1984
This 13-disc collection of singles that were originally released for the Japanese market recently launched around the world, featuring classics including Jump and Panama.View Deal