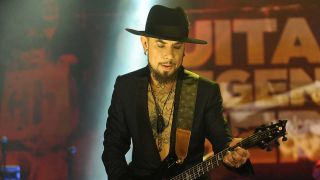 Jane’s Addiction guitarist Dave Navarro will cover David Bowie’s Ziggy Stardust and The Stooges’ self-titled debut album in their entirety at a charity concert in September.

Navarro and longtime collaborator Billy Morrison will play both albums from start to finish at the second annual Above Ground benefit concert at the Fonda Theater in Hollywood on September 16. The pair plan to enlist the help of as-yet-unspecified guest musicians.

“Both of these iconic albums helped shape the sound of Jane's Addiction and were instrumental in terms of influences,” says Navarro. “As a young man I had been drawn to theatrical performances, Kiss and Elton John among them.

“When I got to Ziggy, it was as if I had found the perfect blend of theater, story and depth with a musical originality. As for Iggy, let's just say that our punk rock roots were firmly in place when this album came out, pushing the boundaries of aggression and art and poetry, something that I see in Perry Farrell as well. It's no wonder Iggy is one of his all-time favourites as well.”

“The Iggy and Ziggy thing has always worked,” adds Morrison. “Even when they both did shows together back in the late 70’s/early 80s, the pairing of Iggy Pop and David Bowie worked. Bowie produced Iggy and they had this ongoing musical relationship that just seemed perfect and iconic to us.”

Navarro and Morrison say the gigs are “a celebration of the vinyl album as an art form”, as well as an opportunity to raise funds for the MusiCares mental health charity.  The first Above Ground show took place in April 2018 and featured guest appearances from Corey Taylor, Courtney Love soul Macy Gray plus members of A Perfect Circle, The Cult, Eagles Of Death Metal and more.

“We all work in a business that gives us a platform,” says Morrison “And it's our duty to utilise that platform for good whenever we can. So the music world has so much influence and real power that so many people don't use - Dave and I are just trying to use whatever platform we have to help make a small change and I encourage everyone to do the same. Together we can make a difference.”

Tickets for the show go onsale on Friday, June 28 at 10am Pacific Time.