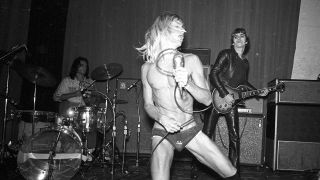 Although now considered hugely influential, when Raw Power, The Stooges’ third album, was originally released in 1973 it was largely looked down upon by mainstream rock. With its barely containable youthful energy and a Tasmanian devil on vocals, the album would serve as a blueprint for the punk revolution that was only a few years away.

“The songs on that album have survived multiple/dubious mixes, the test of time – everything,” remembers James Williamson, Stooges guitarist and co-writer of all the songs on Raw Power. “They still rock, and people still like them… What else can you say? I think that’s a testimony to the songs.”

By 1971 the Stooges were shot, having collapsed due to drug addiction and an indifferent record label. Singer Iggy Pop had retained latter-day Stooges guitarist James Williamson, and the duo sought to form a new band far away from the group’s home base of Ann Arbor, Michigan.

“We got a record deal with Columbia, and Jim [Iggy] had signed with MainMan Management – which was David Bowie’s management,” Williamson recalls. “We came over to London with the idea of forming a new band, to make the record. But we ended up not really finding the kind of guys that we were interested playing with. So we brought over the Asheton brothers [guitarist Ron and drummer Scott] who had been in the Stooges with us, and moved Ron over to bass guitar – which is something he used to do when I first met him. So we ‘re-formed The Stooges’, if you will.”

With the Stooges officially back in business, Williamson and Pop produced a flurry of songwriting. But their new label was unimpressed.

“It’s a convoluted story, in terms of our finding material for the album, because the management team wasn’t accustomed to our style of playing, so they kept rejecting all the songs that we wanted to record. Generally, the way we worked between Jim and I was that I would come up with a riff, we’d get together and he’d come up with lyrics, and then we’d go back and forth and mould a song out of that. Generally speaking, I wrote those riffs in my room on an acoustic guitar. And Raw Power was like that. It was fortunate for us that the MainMan Management team got distracted trying to break Bowie in the US, so they quit telling us we couldn’t do stuff, and we went into the studio and made the album.”

Now armed with Raw Power and a set of other equally powerful tunes, The Stooges set out to lay down the tracks that would become the Raw Power album. And soon the album found itself linked to MainMan’s top artist. “David Bowie was producing a lot of bands back then, like Mott The Hoople and so on. And they made overtures to us [about Bowie producing Raw Power], but we just kind of pretended we didn’t hear them.

Recording-wise, we did that ourselves with an engineer from Columbia, in CBS Studios in London. That was my first album, so I didn’t know anything about recording, really, and the other guys in the band weren’t really that technically proficient. But we certainly had a lot of our own ideas. I’m told that the levels on that recording aren’t very good, especially on the bass and the drums. We probably messed it up. We did a mix that we thought was acceptable, but when we went to deliver it to MainMan for the CBS release they thought that it wasn’t. Then they got Bowie in to remix it.”

Soon after, the songs were ‘Bowied’ back in the US. “First, Jim came over to Los Angeles, then I came over. I think I was there for most of it. Bowie was on tour in the US then, so he had to do it fairly quickly. Like I said, it was my first album, so I wasn’t going to be too critical in the studio. Bowie had done a lot of albums, so we figured he knew what he was doing. But the problem was this was not a Bowie style of music – it wasn’t tune-y or anything that he usually does. So I think he didn’t really understand the music, and he put a real arty overlay on it. There’s been a lot of criticism about it over the years, but you’ve got to give him credit that nothing sounded like it before or since.”

On the ensuing tour in support of Raw Power the title track was the set-opener, and with good reason, says Williamson. “It lends itself to opening up, where the guitar can start out, and the bass and drums can drop in as the members of the band get their gear, and then Iggy can come out and do his thing. Playing that riff over and over again, it’s a nice way to get things going. It was always a good riff. I think it still is. We just played São Paulo [Williamson recently rejoined The Stooges], and we opened the set with Raw Power. It’s just a rockin’ song, with a lot of energy.”

Raw Power remains one of The Stooges’ most ferocious rockers, but does Williamson favour it over the other tracks on the album?

“I don’t know. I think that’s certainly a good one. Search And Destroy has now become a classic song, and I think Gimme Danger is kind of an ‘epic song,’ if you will. I like so many of them; Shake Appeal. We’re going to do them all in London.”

Over the years, quite a few Stooges-influenced bands have covered their songs, including Guns N’ Roses, who tackled the title track from Raw Power on their all-covers album The Spaghetti Incident. What does Williamson think of GN’R’s rendition?

“Let’s just say I preferred the Chili Peppers’ cover of Search And Destroy to what Guns N’ Roses did with Raw Power,” he says diplomatically. “But I was really happy about the royalty cheques [laughs]!”