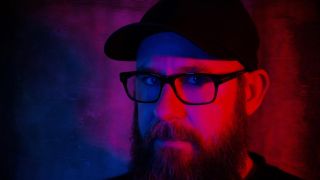 In Flames singer Anders Fridén says that every album is a “photograph” of the people making it at that specific time. So what does the photograph of the Swedish band’s 13th album, I, The Mask look like?

“Three months in LA, drinking good beer, barbecuing and writing heavy metal tunes in shorts,” he says with a laugh.

The backdrop may have been sunny, but I, The Mask pulses with a bleak anger that reflects the crazy world we live in today. “With social media playing such a big part in our lives, we have become quick to judge,” says Anders. “The judge and jury have moved online. People are trying to be so politically correct, pointing fingers left and right, that we have lost track of ourselves.”

He’s not professing to have the answers to the big questions. But luckily, he has some for the smaller but no less important ones we’re about to ask him.

I, The Mask is your 13th album. Are you feeling lucky?

Ha, I didn't think about that, to be honest. I'm feeling happy. I'm lucky that I can continue doing what's my hobby. I never imagined being in this position all this time later. Getting your first demo, your first seven inch, your first album - all that is crazy at that point. To even think about doing four albums or five albums, let alone 13… not at all.

What sort of album did you set out to make this time?

We never have any plans. It's whatever we feel like. We don't write songs in that way. We write albums.

What does the title I, The Mask mean?

We all wear masks. We all need to do that to adapt and cope with the world that we have. It's a form of protection. We have different masks for different situations. But I don't want to spell everything out - I use a lot of metaphors so people can take the songs to their hearts. When we've finished an album, our work is done. I want to give it away for someone to make it greater. If you like the lyrics and it means something to you, I think the whole thing will be greater.

The song (This Is Our) House – who are you singing that to? Is it to the fans?

A call-to-arms for who?

The world. The people who live here. It could be anyone. We have to turn around, because things are going downhill. We're closer to war then we've ever been -there was a time when countries were getting rid of their weapons, now they are making more weapons than before. Scientists keep saying to us that polar ice is melting, but we don't really do anything about it. We have all these things we're accustomed to, we can;'t really change our ways. And I'm not saying this because I'm better than anyone. I'm just an observer. But that song is a call-to-arms - we need to steer things around.

Are In Flames the band to steer things around?

I don't think so. But hopefully we can make people think and then you can do what you want. If you don't want to be part of it, like, ‘Fuck it’, fine, I'm not gonna preach. We're not a political band in that sense, even though I like to talk about those things. But we're really just here to entertain, maybe to help people forget about that seriousness for a while and just lose their minds.

You’ve come along way since In Flames were a melodic death metal band. Do you enjoy pushing fans’ buttons?

Haha, I know what you mean. No, not really. I just do what I do. It’s not intentional. I got into heavy metal to create whatever the fuck I wanted. It seemed like they were no rules to anything, you can do whatever you want. And then later in life, I discovered that apparently there's a lot of rules: you shouldn't do this, you can do that, you can't call yourself this.

Does it bother you that some older fans don’t like what you do these days?

I'm quite aware of what people think - I like this era, I like that era. (Shrugs) OK cool, at least you like one song. I do appreciate that people like it. I'm not taking that for granted. It’s more fun to go on tour and play our music than be in a rehearsal room with nobody listening, so of course i care about that side of things, but I will never write something to try to please someone. You're welcome to join the In Flames train if you want, but if not, what I can I do? If you have a better idea, do it yourself. This is our way, take it or leave it.

You’ve inspired a lot of bands who came in your wake. Some of them good, some bad. Do you ever think, What did we create?

No. But I hear some of our riffs here and there. But that's cool -we drew our inspiration from Maiden and Priest and Scorpions, those bands. I mean, Deep Purple - it was so cool to do that tour [in Mexico in 2018]. That's the reason we did this.

In Flames opening for Deep Purple is a really weird mix.

When our manager called us about it, it was, like, ‘Is this April 1st?' But then I thought, ‘Bands like that are one of the reasons we started.’ And surprisingly it did really work. After the first show, [Deep Purple singer] Ian Gillan came in our dressing room. We had towles on our head and sweating, having a beer, and he walks in and goes, ‘That was fucking awesome! I don’t know what was going on out there but that was fucking awesome!’ And he shook our hands and left. And me and Bjorn were, like, ‘That is such a cool moment.’

You’ve been in In Flames the longest. If you leave, would it still be In Flames?

I don’t think so. Not to pat myself on the back or anything, but it would be crazy to replace me with someone else. I’m not saying someone else wouldn’t do a better job, but I’ve been doing this for 12 albums now. But Björn has been there a long time too. If Bjorn left, I would be alone. If I leave, he leaves and if he leaves, I leave.

I, The Mask is out now via Nuclear Blast