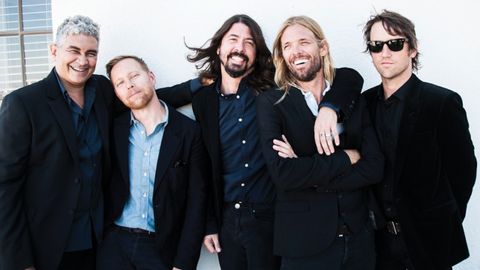 Whether or not you accept Dave Grohl as an honorary metalhead – if only for the brilliant Probot album he released in 2004 – or merely one of the few mainstream superstars that doesn’t come across as an obnoxious corporate dickhole, there is little point in denying that the Foo Fighters’ head honcho has long exhibited a sincere passion for rock music in all its myriad forms.

As a result, the fact that Sonic Highways comes attached to Grohl’s HBO documentary series of the same name, wherein he travels across the US to unearth secrets and stories from the history of American music, makes perfect sense. And in parallel with the documentary’s road trip vibe, the eight tracks on the eighth Foo Fighters’ album were each recorded in a different city, with notable figures from each local scene chipping in. It might not be the most exciting premise for a record, and eight songs lasting 43 minutes seems a meagre return for all the effort involved, but Grohl is hard to dislike and, at the very least, the whole enterprise comes from a good place.

When it comes to the album itself, anyone expecting a radical and eclectic trek through American rock’s shadowy hinterland will be sorely disappointed when they discover that Sonic Highways sounds pretty much like every other Foo Fighters record. Opening track Something From Nothing is a sturdy radio rock affair with plenty of deft dynamics. Quite why Grohl decided to insert an anaemic rip of the main riff from Dio’s Holy Diver is anyone’s guess, but it’s textbook Foos nonetheless, replete with a cameo from Cheap Trick’s Rick Nielsen. The Feast And The Famine is even more straightforward and as catchy as hell. DC hardcore legends Bad Brains are lurking in the background somewhere, but they might as well not be.

Congregation is next – and it’s the best song here by some distance: surging and fiery but elegant too, it’s one of the numerous moments on Sonic Highways that suggests that Grohl is a little too in thrall to his own record collection, but there is enough spark and character on display to rescue it from overly respectful trad rock hell. What Did I Do?/God Is My Witness, which was recorded in Nashville and proudly wears its country rock influences, is really likeable too, but again Grohl can’t help making an unsubtle nod towards his heroes by borrowing a conjoining guitar figure from The Beatles’ All You Need Is Love in the song’s stately second half.

And so it goes on: radio-friendly rock with its heart in the right place, liberally sprinkled with references to whatever was on Grohl’s iPod that day, and all delivered with the twinkling charm that has long enabled Foo Fighters to be unfathomably massive without ever doing anything particularly extraordinary.

In truth, the Sonic Highways documentary is far more worthy of your time, but Grohl’s way with a tune remains firmly intact and if listening to these songs encourages a few people to check out Bad Brains or Cheap Trick – which, one suspects, is part of the plan – then it’s all been worthwhile./o:p