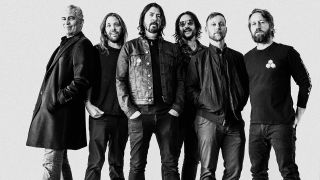 Foo Fighters vocalist and guitarist Dave Grohl has given another insight into what fans can expect to hear once their new studio album is released.

The band have wrapped up work on the follow-up to 2017’s Concrete And Gold, with Grohl checking in back in March to say that it’s “unlike anything we’ve ever done.”

“It's filled with these anthemic, huge, sing-along rock songs. It's almost like a dance record in a weird way. Not an EDM, disco, modern dance record – it's got groove.

“To me, it's like our David Bowie's Let's Dance record. That's what we wanted to make, because we were, like, 'Let's make this really up, fun record.’

“It’s got its dark corners, but we were so excited to go out an play and then we just hit pause on everything.”

Last month in one of his Dave’s True Stories posts on Instagram, Grohl recalled the time when Bowie told him to “fuck off” after an email exchange between the pair.

The Foos have rescheduled their Van Tour, with the shows now taking place across North America in October and December.