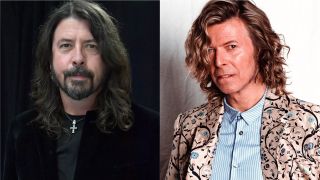 Dave Grohl has recalled the moment when rock’n’roll icon David Bowie told him to “fuck off.”

The Foo Fighters leader looked back on the moment in the latest entry in his Dave’s True Stories posts on Instagram, with the barbed comment sent to him after an email exchange about a possible collaboration between the pair.

Grohl had initially approached The Thin White Duke with the proposition of him providing vocals on an instrumental track for a “big budget, major motion picture.”

Bowie politely turned Grohl down, but insisted the pair could work on something different at some point down the line.

Grohl continues the story: “I immediately responded with a brief note saying, ‘Hey man, thank you for listening to the song. I hope that you’re well, and let me know if you’d ever like to make music together sometime.’

“Short, sweet, to the point. Not wanting to take up any more of his time, I hit send with a smile. Within 60 seconds, my inbox chimed with a new email. It was Bowie responding to the note I had just sent. ‘That was fast,’ I thought. I opened it…

Grohl adds: “My smile immediately went from that of a cat having an afternoon nap on a warm afternoon, too the shock and horror of your first prostate exam.”

Grohl says the pair continued an email exchange, and was relived to find that Bowie could just have been having a bit of fun.

He continues: “I could finally breathe knowing that David Bowie did not actually wish for me to ‘fuck off’ – or maybe he did, but in the nicest way possible, and even that was an honour.

“We ended the exchange with pleasantries, hoping to see each other again, and life went on.”

However, Grohl says it was his last contact with the star, as Bowie died at the age of 69 in January 2016 after an 18-month battle with cancer.

Read the full story below.

Last month, Foo Fighters had to postpone their Van Tour due to the coronavirus pandemic. The shows had been set up in celebration of the band’s 25th anniversary.