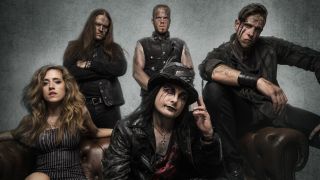 Devilment II: The Mephisto Waltzes is to be released on November 18, it’s been announced.

The Dani Filth-fronted project finished the follow-up to 2014’s debut The Great And Secret Show last month – with Filth describing it as, ‘like fucked-up Manson meets Rob Zombie.’ The artwork and tracklist can be seen below.

Filth says: “Everybody in Devilment is very excited about the prospect of releasing our latest album, The Mephisto Waltzes, which we have worked extremely hard on.

“The album is definitely a step-up from our debut, featuring a more mature, dissonant presence coupled with a darker edge, yet at the same time utilising our better musical assets to deliver a unique metal hybrid. I don’t even know what to classify it.”

The record was produced by Filth’s longtime collaborator, Scott Atkins at Suffolk’s Grindstone Studios in the UK.

Devilment will tour the UK in December in support of the album, with 11 dates scheduled across the country.

Filth has also landed a role as Dr Lon Carlson in upcoming horror film Baphomet, which tells the story of a family cursed by a Satanic cult after they refuse to sell their ranch to the group’s leader Henrik Brandr – who claims it is a sacred land.

Filth exclusively tells TeamRock: “It’s like Race Of The Devil, or something like Rosemary’s Baby. I play a doctor of the occult, with glasses and a beard. It’s a fairly substantial part – a few lines, but not massive.

“Everybody starts suffering these horrible accidents and twists of fate. There’s actually a shark attack scene in it. They eventually bring in expert advice and sort of face up to this cult. It will be out some point next year.”

Watch the trailer Baphomet trailer below.

Filth recently hinted at a ‘Victorian horror’ theme for the follow-up to last year’s critically acclaimed Hammer Of The Witches.

EXCLUSIVE: In The Studio With Devilment