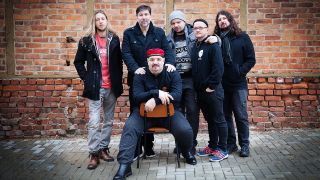 Melodic prog rockers Damanek have announced they will release their new album in 2020.

The forthcoming new album is currently going under the working title of Making Shore, "as the first two releases, On Track and In Flight, both implied movement and travel (by rail and air) in their names and so I was leaning to a more
Sea/Water-centric title this time (but two words again... isn't branding wonderful),"| singer and keyboard player Guy Manning tells us.

"This new set of material sees us once more return to ecological concerns/issues and of course from a narrative empathetic point of view, placing the listener in the heart of the story... naturally. 80 odd minutes of initial demos have been written with some quite diverse themes."

In the meantime multi-instrumentalist Marek Arnold's side project Cyril have released a new album. The Way Through, which features Manning has provided lyrics, and guitarist Luke Machin's Maschine, who are about to tour the UK with District 97, are recording their third album.