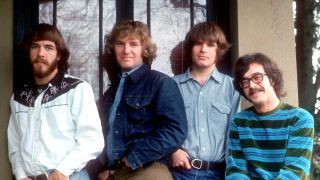 Creedence Clearwater Revival are to release their 1969 set from Woodstock in its entirety for the first time. Live At Woodstock will be released on August 2. The band have also released the Woodstock version of the classic Born On The Bayou.

Having already headlined the Atlantic City Pop Festival and the Newport Pop Festival that summer, Creedence took the stage after midnight on the Sunday of Woodstock, after an extended set by the Grateful Dead.

"By the time we got to Woodstock, I felt we were the number one band," said John Fogerty. "Assuming that The Beatles were God, I thought that we were the next thing under them.”

Creedence originally declined to be included in the 1970 documentary Woodstock – and the film’s soundtrack album – after John Fogerty apparently felt that the late start affected the band's performance.

Last month, it was announced that the 50th anniversary of Woodstock is to be celebrated by the released of a monster 432 track box set, featuring 267 previously unreleased tracks.