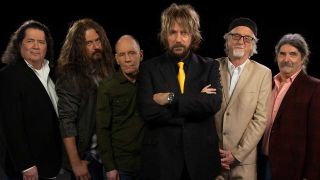 Crack The Sky - Living In Reverse

US prog rockers Crack The Sky, recently hailed by Rolling Stone as "the best US prog band you've never heard", release their new album Living In Reverse through Loud & Proud Records today. They have released a lyric video for the track Talk Talk, which you can see below...

At the same time, a career retrospective for the West Virginian proggers, whose self-titled debut album was hailed by Rolling Stone as "one of the year's most impressive debuts" back in 1976, entitled Crackology, is also released.

“We’ve been going back in time to try and find ourselves, even while we’ve been looking ahead to the future,” guitarist/producer Rick Witkowski told Prog. “And we’re looking to bring in new fans who’ve never heard what we’ve done before.”

"Eventually, you find that everything comes full circle, so it’s fair to say we’ve been quite reinvigorated as artists these past few years," adds vocalist John Palumbo.

Crack The Sky will headline the 4th Annual Veterans Benefit Concert in Baltimore, MD tomorrow, and also play Rams Head On Stage in Annapolis, MD on November 2 and 4.