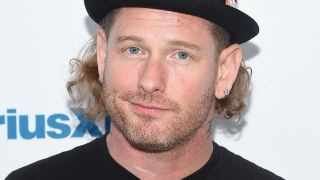 Corey Taylor has married Alicia Dove in a ceremony in Las Vegas, according to Hellyeah bassist Kyle Sanders.

He uploaded a picture to his Facebook account showing him with the couple and added: “Great big love to Corey and Alicia for sealing the deal! Great times and grateful for being a part of your celebration of marriage. Plenty of good times to come.”

The Slipknot and Stone Sour frontman announced his engagement to the founding member of dance troupe Cherry Bombs back in April on Instagram.

Later, when a Twitter fan asked Dove how Taylor proposed, she replied: “After breakfast at home. As I put the salsa back in the fridge I shut the door and he was standing there with a ring.

“Got down on one knee, and I immediately started crying on the floor with him.

“In our kitchen. In our sweats, nothing fancy. It was fucking perfect.”

Slipknot, meanwhile, are preparing for a run of shows in South America before returning to the UK and Europe in early 2020 in support of their latest studio album We Are Not Your Kind.

The limited edition documentary titled In Search Of Darkness: Corey Taylor Collector’s Edition is still available to purchase and will be up until midnight on Halloween.

Taylor is joined in the film by actors, directors, writers, editors, make-up artists and more to talk about the stand-out horror flicks of the 80s – with each giving their take on the genre.