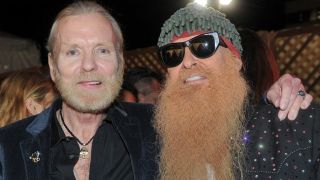 Presentations took place after live performances by Scott Weiland and the Wildabouts and Rival Sons, with California Breed playing at the interval and supergroup Kings Of Chaos – including Hagar, Gibbons, Joe Elliott and Glenn Hughes – closing the evening.

Liveblog: The awards night as it happened

Speaking after he was confirmed as this year’s winner, Allman said: “I am so very honoured to be receiving this award. The magazine is one of my favourites and they are always so generous to me and the Brothers.” He’ll return to the UK in July 2015 to headline the inaugural Ramblin’ Man Fair.

The Doors, who won this year’s Inspiration Award sponsored by Global Merchandise, are poised to release long-lost documentary Feast Of Friends. Guitarist Robby Krieger recently told Classic Rock: “When people see this who have already seen The Doors movie, and they think that’s how Jim was, that he was a total idiot – now they’ll see him as a real person; how brilliant he is.”

Queen and live collaborator Adam Lambert were named Band Of The Year sponsored by Universal Records. Lambert, who’s been working with Brian May and Roger Taylor for three years, admitted: “At first it freaked me the fuck out – but then I started learning from them.”

Metallica’s Lars Ulrich thanked fans via a video when their concert movie Through The Never won them Film Of The Year sponsored by AXS.TV.

Def Leppard frontman Elliott presented Ozzy Osbourne with the Classic Album award sponsored by Eagle Rock for Blizzard Of Ozz, saying: “A guy once came into a theatre where we were playing and asked us if we were okay – then had a piss out the window. His name was Ozzy Osbourne. Ozzy, we will never forget how you looked after us.”

TeamRock Radio will air a feature-length edition of The Classic Rock Magazine Show at 5pm this evening, presenting three hours of interviews and behind-the-scenes action from the awards ceremony.

Film Of The Year (sponsored by AXS.TV): Metallica – Through The Never

Reissue Of The Year (sponsored by The Great Frog): Led Zeppelin_ I_, II, III Deluxe Editions

The Bluesman (sponsored by The Blues Magazine): Eric Burdon