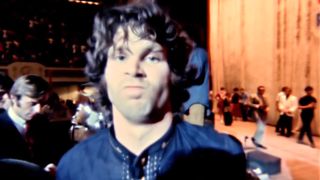 The Doors drummer John Densmore is delighted that unfinished 1968 documentary Feast Of Friends is to be officially released at last – even though he admits: “It’s not a masterpiece.”

And he’s glad that the band’s only UK appearance, at London’s Roundhouse, is included in the package, which goes on sale via Eagle Rock on November 10.

Feast Of Friends was left incomplete after finance was withdrawn as a result of frontman Jim Morrison’s arrest for allegedly exposing himself in Miami – for which he was pardoned in 2010.

Densmore tells MusicRadar: “Not too much more was planned at the time – we didn’t have too far to go on it. The label didn’t step in, though. We were getting a little worried because we were putting a lot of money into this thing. Of course, Ray Manzarek and Jim were like, ‘So what?’ That was their world pretty much. So the project kind of stopped at a point, but what’s there is great – I’m sure glad that we have it.

“What pleases me about this release is that the Roundhouse performance is being included. For years I’ve said that, even though it’s black and white, it’s our best performance on film.”

He believes the documentary shows they were more like the Beatles than the Stones backstage. “It wasn’t crazy; everything was pretty subdued – unless Jim was drinking. Then we’d be worried: ‘Oh, God, is Jim going go over the line, or is he going have just the right balance?’ Of course, all of that chaos and danger kind of made us who we were.”

And despite the dramas of dealing with Morrison when he did go too far, Densmore insists they never considered trying to hold him back. “We knew Jim was magic. There’d be times when we’d be riffing on a groove, and then he’d go off and do some wild poetry or confront the audience. But the whole time we’d lay down a bed of sound and keep that going while he did whatever was on his mind.”