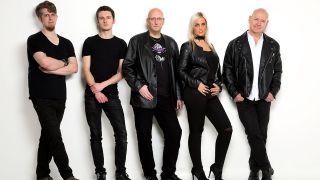 Cairo have released a lyric video for their track Katrina exclusively with Prog.

The song features on the Rob Cottingham-led project’s debut album Say, and tackles the political fallout that followed the devastating hurricane that caused catastrophic damage along the Gulf Coast in the US in 2005.

Cottingham tells Prog: “It’s symbolic of what underpins all of these man-made disasters which simply shouldn’t happen, but will continue to happen if we don’t get our priorities right.

“Look at Katrina, Grenfell, Genoa – all totally avoidable, and yet someone did not understand or chose not to understand the ramifications of insufficient investment in simply keeping people – and especially the under-privileged – safe.

“This is a global issue, from the largest and most powerful government who seemed utterly powerless at the time, to tin-pot dictators running countries to line their own pockets while the underprivileged struggle to even find clean water and a roof over their head.”

Professor and prog fan Andrew Curtis from Ohio’s Kent State University was involved in the disaster recovery process at the time in New Orleans and got in touch with the band after hearing Katrina to say that it resonated with him on a personal level.

Curtis says: “I was reading Prog and intrigued by a review mentioning the song Katrina by Cairo. I really enjoyed Rob’s previous band, Touchstone so I sent him a message. Several email exchanges followed about both the disaster and his musical vision.

“These conversations led to a meeting at Oxford University in 2017.

"In a rather surreal interview, in the setting evening light on the Christ Church Meadow, we talked about Katrina and the similarities and links to so many other events. At that time it was the Grenfell Tower— now it’s the collapsed bridge in Genoa.

“Rob’s a passionate guy who is obviously moved by these events, and the fact that, even given all the complexity involved, it’s the common person who always seems to pay the greatest cost. I remember saying that for me, the importance of a song like Katrina, was to get people intrigued, then dig a little deeper and finally get involved.”

You can watch the Katrina video below, where you can also find the full interview with Professor Curtis.

Say is available to purchase via Amazon and through Apple Music.

Cairo are currently writing new material and planning live shows for the near future.