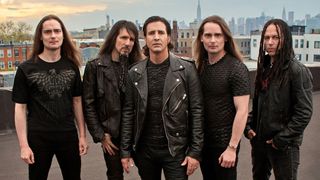 Art Of Anarchy guitarist Ron ‘Bumblefoot’ Thal says the band provides a healthy environment for frontman Scott Stapp as he continues his fight to stay sober.

After a public meltdown which saw him claim he was the target of a US government conspiracy, Stapp is clean and sober and looks healthier than he has for years.

Bumblefoot insists the singer is “doing well” and that he’ll find no temptation coming from his new bandmates – who include Disturbed bassist John Moyer and brothers Jon and Vince Votta.

Bumblefoot says: “The band, Art Of Anarchy, is drug free. Me and the Votta brothers have never even smoked a cigarette, none of us drink, have never done drugs, never smoked pot or anything like that.

“So that’s good, because the last thing you need on the road if you’re trying to stay clean is a bunch of people doing that around you.

“Scott is doing well. It’s life. We can’t be at our best all the time, it’s not possible. It’s great that he has a strong family and a lot of people that care and support and that were there to help him get out of that situation. Now he’s better than ever.”

Working with Stapp has been a revelation to Bumblefoot, who says the singer is a perfectionist in the studio – the exact opposite of himself.

“It’s been good, we’ve had a couple of real fun times,” he says. “We get things done and definitely focus hard and hone in.

“It’s different because he goes for perfection and I’m the opposite…I go for imperfection. Like, ‘Find me something wrong.’ It makes it human. Between the two, it forms this interesting, natural balance.”

Art Of Anarchy play their first ever show this week, making their live debut at the Gramercy Theatre in New York on October 27 (Thursday). They released their first single with Stapp – The Madness – earlier this month.

After that show, they will get to work on their second album, which they aim to release in March 2017.

Bumblefoot adds: “We are all getting together in New York to do two days of rehearsals and press and radio shows and then our debut show is going to be on Thursday. After that, we’re just back to work. I’m going on tour and Scott’s going on tour and we’re gonna finish up what we have to for the year.

“Then we’re gonna get back to recording and writing and getting this album done. Hopefully that whole process will be done by the end of January or early February and then it should be out by March if all goes well. I would say the album is about two-thirds done.

“We are expecting to tour and hopefully everything will go okay.”

Weiland’s time with the band was shrouded in confusion and the vocalist said he was simply hired to write and record vocals and that he was never a member of the group.

Asked whether things might have been different if Weiland had not died of a drug overdose late last year, Bumblefoot says there is no chance Weiland would have worked with Art Of Anarchy again.

He says: “That wasn’t gonna happen.”

Weiland’s vocals were added to the debut album after all the tracks had been written and recorded. The process for the follow-up will be very different, with Stapp a full-time member of the band and involved in the writing at every stage.

Bumblefoot adds: “The first album started off as Jon And Vince Votta doing their dream album and then after the fact, Scott Weiland took all the songs and wrote lyrics to everything. And the rest is some bizarre history!

“This time, we’re all writing together and building songs from scratch.”

He will also meet with students from his Bumblefoot Rock Project.