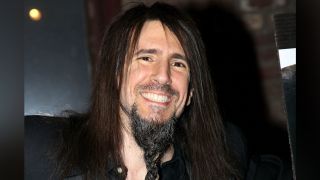 He spent much of last year fielding questions about his status in the lineup, saying that he couldn’t confirm or deny that he’d left because he’d been asked to stay silent.

“If you’re having a lot of everything, you’re really living it, and that’s what it’s about. I wish them well. I wish them all well, I do.”

He posted a message online saying: “This is a nostalgia tour. Please don’t mention those who are there the last 20 years, oh God no. A money grab. FU.”

He later deleted the comment and tweeted: “I sincerely apologise to GNR, especially the band and crew, for stupid comments about the upcoming tour. Remember kids, don’t drink and text!”

Guns N’ Roses continue to prepare for the first shows to feature Axl Rose, Slash and Duff McKagan since 1993, with Slash posting a picture of his new guitar pick. Guitarist Izzy Stradlin this week said he wasn’t part of the band’s reunion plans so far.

GNR are the cover stars of the current edition of Classic Rock, on sale now in print, online and via TeamRock+.