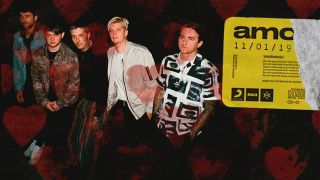 Bring Me The Horizon have released a brand new single, announced the launch date for their new studio album, and given details on a UK and European tour.

The album is titled amo and will arrive on January 11, 2019, with the band revealing the first track from the record, Mantra, last night on BBC Radio 1. A stream of the song can be listened to below.

Speaking about the album, frontman Oli Sykes says: “amo is a love album that explores every aspect of that most powerful emotion.

"It deals with the good the bad and the ugly, and as a result we’ve created an album that’s more experimental, more varied, weird, and wonderful than anything we’ve done before.”

Bring Me The Horizon will head out on the road throughout November this year on a run that will take in a total of 19 dates under the First Love banner.

They’ll kick of at Stuttgart’s Schleyer-Halle on November 5 and wrap up with two shows at London’s Alexandra Palace on the 29 and 30 of the month.

Those pre-ordering amo before 3pm GMT on August 28 will receive priority access to tickets for the UK leg.

Tickets will go on general sale on Friday, August 31.

Last week, posters and flyers started to appear at locations around the world featuring the line: “Do You Wanna Start A Cult With Me?” which is the opening lyric to Mantra and yesterday the band teased a new image of Sykes.

Find the Bring Me The Horizon tour poster below along with the amo cover art. A full tracklist will be revealed in due course.