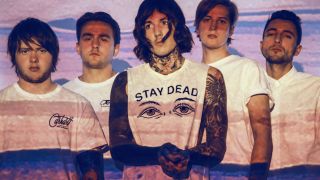 Oli Sykes insists that Bring Me The Horizon’s recent move towards a radio-friendly sound isn’t a case of the band selling out.

That’s because they’re making the kind of music they always wanted to make.

BMTH released fifth album That’s The Spirit in September. It hit number one on rock charts across the world, and narrowly missed out on topping the UK’s mainstream chart.

Sykes tells BBC Radio 1: “We always wanted to be the catchiest, heaviest band. It wasn’t intentional to become an A-list radio band. It was just the music we like.

He adds: “That’s why people from the scene still respect us, and new people are getting into it – it doesn’t feel like something we’re doing for any other reason than because we love it.”

BMTH keyboardist Jordan Fish recently said the band were considering an orchestra tour. They remain on the road until November.

Bring Me The Horizon 2016 tour dates