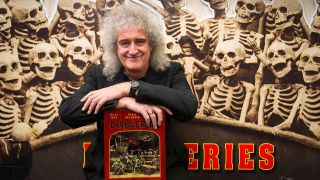 Two years ago Queen guitarist Brian May launched a pair of augmented reality apps for Halloween, and now he's back with another horror-related project.

Alongside fellow curators Denis Pellerin and Paula Fleming, May is holding an exhibition of 19th century three-dimensional 'Diableries' cards. The cards are  stereoscopic photographs of hellish landscapes and creatures, originally modelled from clay.

The exhibition takes place at London's Century Club between 11am and 4pm on October 28, which will be transformed into a "Victorian crypt of temptation and seduction" for the occasion. Entry is free.

"Denis Pellerin, Paula Fleming and I have been on a world-wide quest for the last 30 years, to unearth every one of the 182 Diableries cards ever made," says May. "When we published the first edition of our book – Diableries: Stereoscopic Adventures in Hell -  we were still just two short.

"Now the set is finally complete, and in this new Diableries exhibit, we’ll be sharing the entire series of these devilish enchantments for the very first time since 1860. These 3-D Adventures in Hell from Victorian times are as astounding as ever, and we’re proud to give them a new lease of life in the 21st century. The exhibition opens the week of Halloween!

"The exhibit will also include some original stereoscopes and cards from the 1850s onwards; we’ll be showing you how these incredible stereoscopic masterpieces were created, and how they can be brought to life in 3-D today, as crisp and hot as when they first set the public on fire in 1861."

Diableries: Stereoscopic Adventures in Hell is available to pre-order now.

The guitarist has previously published a book featuring stereoscopic pictures of crinoline petticoats, another one of moon photos, created an animated film based on Diableries called One Night In Hell, published the book Queen in 3D, launched a virtual reality headset, and collaborated with Google on a Bohemian Rhapsody virtual reality experiment.