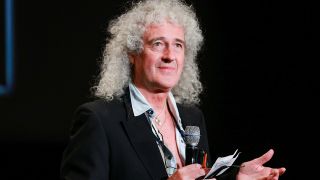 Queen's Brian May has teamed up with astronomy journalist Dave Eicher to produced a new publication titled Mission Moon 3D.

The book will be be published by The London Stereoscopic Company on October 22 and priced at £30 and is the latest visual project the guitarist has been involved with in recent years.

The guitar icon was behind Queen In 3D, a 3D book on Victorian fashion and he also launched two augmented reality apps for Halloween last year.

The new book will take readers on a journey through the events leading up to Apollo 11’s moon landing in 1969, with the publication featuring more than 150 views – including previously unseen shots from the NASA archives and from Russian sources.

May says: “I’m proud to present the London Stereoscopic Company’s 8th book, and this one is something absolutely unique. With text by astro guru David J. Eicher, it’s the story of the space race and the Apollo moon landings told from both sides of the race – and brought to life for the first time ever in true side-by-side full-colour stereoscopic 3D.

“Somehow, although it’s 50 years since these historic adventures, the trail is as fresh as ever, especially viewed in the ‘virtual’ world of the stereoscope.”

Each copy on Mission Moon 3D will come with a Lite Owl viewing device, which was designed by May to bring the images to life.

Queen, meanwhile, will release the official soundtrack to the Bohemian Rhapsody film on Friday (October 19) ahead of the biopic’s world premiere on October 23.

The 22-track collection will feature previously unreleased audio from the band’s celebrated Live Aid performance in 1985, new versions of old favourites and a selection of songs from the band’s back catalogue.

Queen are also the cover stars of the new issue of Classic Rock. The latest edition is available now and looks back at the band’s first 15 years, from just another band of hopefuls, to global superstars, through worrying slump to ruling Live Aid.

Mission Moon 3D
Queen's Brian May and astronomy journalist Dave Eicher join forces for this new publication featuring more than 150 views of the Apollo 11 mission to the moon.View Deal