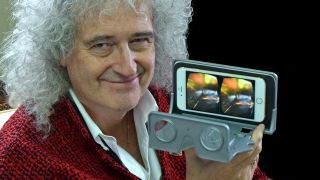 Brian May with the OWL Viewer

Queen guitarist Dr Brian May has launched a Virtual Reality headset. The device, called the OWL VR Smartphone Kit, allows owners with a smartphone to view online 3D images as well those they’ve taken themselves.

The release coincides with the availability of a series of Queen 3D cards featuring stereoscopic images of Queen shot by May, including unreleased pictures of Freddie Mercury. These cards, as well as the viewer, are available from the London Stereoscopic Company.

“Virtual Reality has taken the consumer electronics world by storm over recent months and masses of content is now rapidly becoming available,” says May. “However, until now, users have had the choice of an expensive VR viewer that puts it out of reach of many people or a very low cost alternative that just doesn’t do the format justice. The OWL isn’t tied to one make of handset, and — unlike alternative viewers such as Google Cardboard — allows full access to the phone’s controls while in use.

“The OWL Smartphone Kit changes all that; for a very modest outlay, anyone can now enjoy the VR experience, and also gain access to the fascinating world of Stereoscopy. Plus, with the apps that are available for smartphones, it’s now possible to take your own 3D images and enjoy them instantly using this simple OWL Kit.”

In our exclusive video, below, May talks about how the viewer is the result of a life-long dream, why he’d love Freddie Mercury to have been involved, and whether a holographic image of Freddie could ever appear on stage with the band.