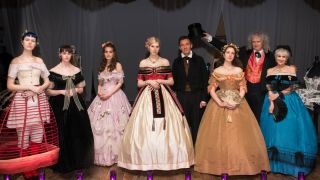 Brian May and Denis Pellerin have launched a book about Victorian crinoline petticoats. Crinoline: Fashion’s Most Magnificent Disaster, is published by the London Stereoscopic Company and features many 3-D pictures shot in the latter half of the 19th century.

The book was launched with a stereoscopic presentation by May and Pellerin at London’s Sands Films Studios, which also featured a fashion parade starring May’s wife Anita Dobson.

“I wasn’t too sure about investigating underwear when we started this project,” says May. “I was committed to the stereoscopic part of it, but gradually I’ve realised that the underwear part of it is incredibly important, both sociologically, and to the growth and presence of women in our society.

“We had two very interesting phenomena in Victorian times. One is stereoscopy, which is a massive craze in the 1850s and 1860s, and the other was crinoline, which was also a massive craze, and the two interacted in an incredibly unusual way.

“Crinoline came as a storm to the Victorian public, and for Victorian ladies crinoline was some kind of liberation. It’s hard to research Victorian women because it’s almost like they don’t exist. They had no status, they had no paperwork. The only thing they are is somebody’s wife, but as soon as their husband dies they’re nothing. They’re out on the street, and they can’t feed their children unless they marry again.

“Suddenly, along comes this wonderful creation called the crinoline, and it materially — and metaphorically — gives them a space around them. It gives them status.”

May first discovered stereoscopic photography — a technique whereby two slightly offset two-dimensional images are combined to give the perception of three-dimensional depth — as a child, and in 2008 revived the London Stereoscopic Company, a business originally set up in 1854 to sell stereo pictures and stereo viewers to the public. Crinoline: Fashion’s Most Magnificent Disaster can be ordered from the company now. Orders include the Owl Viewer, a device for looking at 3-D images invented by May.