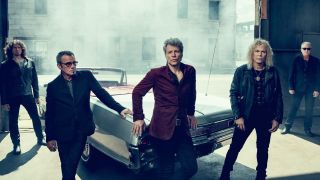 Bon Jovi have announced a series of listening parties for next album This House Is Not For Sale, to be followed by a US tour.

The band appeared at New Jersey’s Count Basie Theatre earlier this month to let fans hear the follow-up to 2013’s What About Now.

They’ll do the same at the London Palladium, UK, on October 10, Toronto Queen Elizabeth Theatre, Canada, on October 17 and New York Barrymore Theatre, US, on October 20, with the events to be streamed live on Tidal.

The 20-date tour begins on February 8 in South Carolina and ends on March 22 in Indianapolis.

This House Is Not For Sale, Bon Jovi’s 13th album, will be released on November 4 – delayed from the previously-announced date of October 21. It’s their first release since the departure of guitarist Richie Sambora, who was replaced by Phil X in 2014.

Frontman Jon Bon Jovi last month said there was no ill-will remaining between the pair, adding: “Being in a rock band is not a life sentence and just because he chose not to come back that was his prerogative, end of story.”

He’d previously said of his latest songs: “I have a lot to write about. Believe me, the new record is good. It’s pointed – it’s something we’re going to be very proud of when we put it out.”

Concert tickets come with a physical copy of the album.

Bon Jovi: This House Is Not For Sale tracklist

Every Song On Bon Jovi's Slippery When Wet, Ranked From Worst To Best