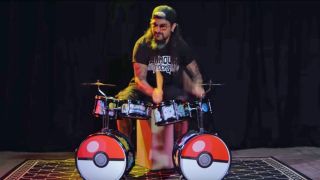 Drummer Mike Portnoy has celebrated the anniversary of last year’s stunt in which he played a series of rock classics on a Hello Kitty drum kit by performing another. And this time, he’s thrashing a kit that capitalises on the success of the popular Pokemon franchise.

The former Dream Theatre man starts with the opening drum fill from that band’s 6:00 before falling to the floor as the tiny kit disintegrates. This sets the tone for much that follows, as Portnoy attempts to play Dream Theatre’s Honour Thy Father and Twisted Sister’s We’re Not Gonna Take It.

Portnoy then kicks the kit away in despair. He’ll no doubt return with another set next year.