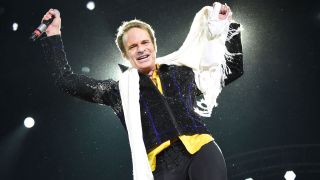 David Lee Roth says that too much stage spectacle could distract from Van Halen’s performance.

Though the singer admits that the group previously favoured the “technicolour fantasy” productions, he says that Van Halen are still a “club band” at their roots – and that their shows “begin and end with the music.”

Roth says on The Roth Show: “The question is ‘is it the show or the music?’ This is always a pivotal question with Van Halen – at what point does the show distract from the music, because what Van Halen is is a club band playing to a club audience on massive scale.

“You can say it’s a selection of songs with a narration, I break the fourth wall constantly and talk directly to you and turn and face the camera and describe ironically what is or isn’t happening – or you could look at it as a speaking one-man show with really great songs – it alternates in between the two and too much visual can distract from that.”

Roth, who also defended the band’s decision not to “Photoshop” their live album, says that Van Halen decided to keep it simple on their Tokyo Dome tour last year.

He adds: “This time we chose to go outdoors underneath the stars. I believe that it begins and ends with the music.

“It’s a whole event that goes beyond stage production. I’m imagining, primarily, that the band on stage simply playing the music.”

Roth said last month that he was confident that Van Halen would record a studio follow-up to 2012’s A Different Kind Of Truth.