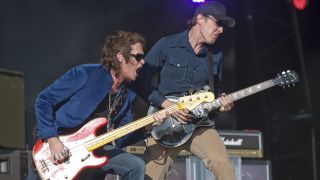 The bassist and vocalist says he’s been writing the as-yet-untitled follow-up to 2012’s Afterglow with guitarist Joe Bonamassa. The supergroup’s lineup is rounded out with the drummer son of late Led Zeppelin man John Bonham, Jason, and keyboardist Derek Sherinian, who has previously worked with Dream Theater and Alice cooper.

He tells Myglobalmind: “We actually started about six weeks ago as Joe was at my home for about a week of writing.

“We are starting another week of writing together where we will finishing writing BCC 4. Then we go into the studio in January and the album will come out May 20.

“It’s such a focused thing. Joe and I are very excited about BCC 4. Back in April, when Joe and I were having dinner in Santa Monica, we talked about making this new album – and decided to really go for it as well as how now may be the right time to do the reunion. Certain things work at certain times. The love and support we have behind BCC are amazing.”

Black Country Communion split four years ago, after relations broke down between frontman Hughes and guitarist Bonamassa over differing career priorities – but they announced their comeback in April.

When asked whether Black Country Communion will be touring in support of their forthcoming release, Hughes says: “It’s impossible to pinpoint that yet or if it will happen at all. Joe and I have to find windows where we can tour, or maybe just play select shows behind the album.

“Between you and I, or whoever is reading this, my life is around playing live with the Glenn Hughes solo band. I have a great band and crew to that drive me to continue to play live and to keep me going. That’s what it is all about – to play live in my own band.”

Hughes recently announced he’d cancelled his upcoming European tour – blaming support act Living Colour’s decision to pull out and back Alter Bridge instead. He was due to promote upcoming solo album Resonate on the dates.