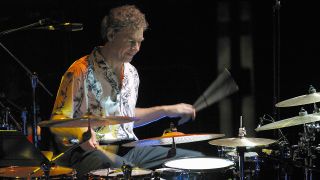 Bill Bruford’s Earthworks have released an expanded edition of their 1997 compilation Heaveny Bodies.

The original version has been out of print for some time, with the new collection now boasting a total of 23 tracks which have been selected by Bruford from the Earthworks Complete deluxe box set - which is available from Amazon.

Bruford says: “Heavenly Bodies: The Expanded Collection serves as the ideal ‘beginners’ guide’ for newcomers to the band. Progressive jazz isn’t a million miles from progressive rock: both genres prioritise change from inside and out.

“People would come away from our gigs saying, ‘I didn’t think I liked jazz, but if that’s jazz, I love it!’ Heavenly Bodies: The Expanded Collection is the perfect jumping off point to dip your toes in the water.”

Along with the music, the package includes newly written liner notes, while all audio, visual and printed material were sourced and curated by Bruford, with additional artwork created by  award-winning illustrator, photographer and filmmaker Dave McKean.

Bill Bruford's Earthworks: Heavenly Bodies: The Expanded Collection
This new version of the 1997 compilation has been expanded to take the form of a career-spanning compilation and now boasts a total of 23 tracks.View Deal