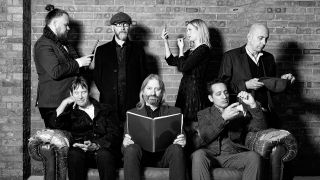 Big Big Train have released a trailer video for their forthcoming new album Grand Tour. You can watch the trailer below.

"This new lyric film was created by Toward Infinity who used some of the album's booklet artwork to illustrate excerpts of music from Grand Tour," bassist Greg Spawton tells Prog. "This will be the last music we will share ahead of release of the album on 17th May."

Grand Tour is released next Friday, May 17. The band will be featured on the new Prog Magazine podcast which will air next Wednesday.

We also are now down to our last few exclusive Big Big Train bundle of the new issue of Prog. An exclusive bespoke Big Big Train front cover, signed art print and signed lyric sheet for Alive, from Grand Tour for £15. There's a strictly limited run of 300 and they can be ordered now. When they're gone, they're gone...

All pre-order options are at www.bigbigtrain.com