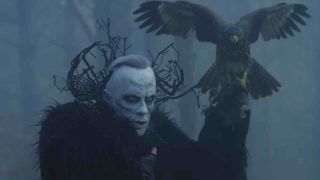 The song appears on the Polish band’s new EP, also titled A Forest, which is released on May 29.

Says Behemoth frontman Nergal of the song: “Covering music outside of metal is a challenge  covering legendary music is an even greater challenge…that is what drove us throughout this process. A lot of bands try it and a lot of bands fail; subjectively, I love the outcome and it ranks amongst my favourite Behemoth covers alongside Killing Joke’s Total Invasion and Siekiera’s Ludzie Wschodu.”

The song’s video, directed by Claudio Marino, features Nergal and Kvaforth performing the song in an eerie wood.

Of Kvaforth‘s contribution, Nergal says: “Niklas’ psychotic appearance, attitude and vibe was a key element to our representation of the music and the only man who could give the performance the same depth as the original.”

Nergal explains: “The tracks act as a continuation on from [Behemoth’s current album] I Loved You At Your Darkest – no more, no less.  We hope this brings some respite for anyone struggling during these strange times on our planet!  Stay safe, stay positive, Hail Satan!”

The A Forest EP is released on May 29 and available to pre-order now.