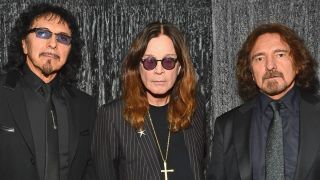 PutFansFirst.co.uk has been organised with the help of the House Of Commons’ All Party Parliamentary Group For Ticket Abuse, who believe the industry needs urgent legal support to fight against organised online touts and botnets, who buy tickets before fans have a chance then resell them at massively inflated prices.

After a recent amendment to the Consumer Rights Bill were defeated in an MPs’ vote, co-chairman Mike Weatherley MP wants everyone from musicians to fans to become proactive in ensuring lawmakers realise how they feel about secondary ticketing.

Weatherley tells TeamRock: “Our creative industries generate more than £36bn and employ 1.5m people. For success to continue it’s necessary to ensure that artists and fans get a fair deal.

“Society has moved on from a few touts outside venues selling tickets at marked-up prices. The new issue is botnets, which buy up tens of thousands of tickets seconds after they’ve gone on sale, so genuine fans are unable to buy at source prices.”

He believes the problem directly hurts income across the entertainment industry. “Let’s say a fan has £200 to spend on live music. If they have to pay the whole lot to go to one event, rather than go to four at £50, then there’s going to be a quarter as many events being promoted.

“Income to venues and artists does go down directly as a result of these inflated ticket prices. We should all be concerned by this in the long term.”

Weatherley and his cross-party colleagues believe the dismissed amendments would stop botnet operations, allow artists to set ticket prices, ensure revenues go to venues and artists, provide more security for buyers and protect the government’s investment in the arts.

He says: “Discussions are currently ongoing that could see an agreement being reached. Whether an agreement is reached or not, the issue will come back to the Commons for further discussion and legislation.”

Iommi has offered his support by saying: “If you agree that fans should be able to sell tickets that they can’t use but not allow this to be exploited for commercial gain, here is the link.”

Smallwood adds: “Secondary ticketing excesses are a blight on live music events. Many major music managers, artists, agents and promoters have long been calling for government intervention and legislation. It would be easy – as some bands and organisations do – to jump on the gravy train and create large extra income streams at the expense of their fans. But they don’t. Why? Because they consider it cynical, long term counter-productive and immoral.”

PutFansFirst has also received support from the Featured Artists Coalition, The Agency Group and sporting bodies the ECB, the RFU and the Sport & Recreation Alliance.

Weatherley urges: “We would like to create as much pressure from fans and providers of live events, supporting a change in the law on secondary ticketing – especially through members of the public writing to their MPs. This would be a hugely helpful step in persuading MPs that this is an issue that needs addressing.”