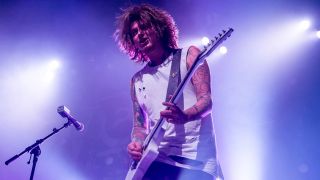 Asking Alexandria’s Ben Bruce has paid $500 out of his own pocket to a fan who claims he was swindled by former frontman Denis Stoff.

Belgian solo artist Maxime Solemn says he’d paid $500 as a down payment for a guest vocal spot from Stoff in late 2014 – who was then fronting his previous band Down & Dirty – after the singer told him it would cost $800.

When Asking Alexandria recruited Stoff last year, the vocalist reportedly told Solemn there would be no guest spot – but he never refunded the payment.

In an interview with Brian Storm, Solemn says he hounded Stoff and Asking Alexandria’s label Sumerian Records with emails and didn’t receive a response. He then added the frontman on Facebook, who told him that he’d changed his email address and would pay him back after tour.

After Stoff left Asking Alexandria under a cloud last month, Solemn came out publicly about the unpaid debt to warn others not to make the same mistake. Now he reveals guitarist Bruce got in touch with him over Twitter after hearing the story to reimburse him – despite that the deal took place before Stoff was in the band.

“I was legitimately fangirling. I lost my cool on Twitter – we were private messaging and I was like ‘What, this is happening?’ I said I would check Asking Alexandria out in Belgium again this February and Bruce said, ‘Yeah, we can have a drink’ and I was like, ‘What!?‘”

Watch the interviews below.

Last month, as Bruce announced the return of Danny Worsnop to Asking Alexandria, he admitted they’d been warned over “different things about Denis’ past” – but said they’d wanted to offer him the “benefit of the doubt.”