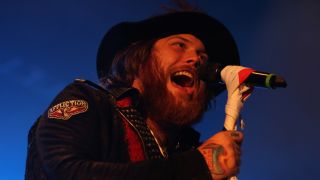 With the dramatic recent return of their original power chops Danny Worsnop, Asking Alexandria are the band on everyone’s lips right now. Whether you’re a dedicated Danny fan or an admirer of his temporary replacement Denis Stoff, there’s an era of the Brit boys’ face-melting metalcore for everyone. Sweep all your hair to one side, hitch up your skinny jeans and prepare to belt out the deepest growl you can muster – it’s time to look back on Asking Alexandria’s 10 best tracks.

The most delicate moment of their back catalogue, Someone, Somewhere tugs on your heartstrings in a way long-time AA fans didn’t see coming – and that’s the beauty of it. Danny’s emotive melodies and guitarist Ben Bruce’s toned-down backing provide a perfect soundtrack for any slow-dancing lovers in the pit. Sure, it’s nothing like their usual chaotic anthems, but this glimpse into their lovey-dovey side is worth its weight in tears.

Featuring soundbites of Danny’s infamous episode appearing on stage intoxicated, his bandmates pleading with the crowd to beg him to seek help for his alcohol dependency, this is Asking Alexandria not just accepting their faults, but pointing a spotlight square at them. Don’t Pray For Me is a one-in-a-million glimpse of the real lives behind the band’s music and a priceless example of their connection with their fans – one which we hope will continue.

Denis Stoff’s reign at the helm of the good ship Asking Alexandria may have been short-lived but was a great chance to try something new – their fourth album The Black still stands as a heroic return to form for a band that yanked themselves back from the brink. A truly heartbreaking ode to a lost direction, Send Me Home is somewhat prophetic but also speaks volumes for Denis’s versatility – check out some of those killer high notes.

Pit-enticing breakdowns, gut-wrenching growls and one easy lady – clearly the average Wednesday afternoon for Asking Alexandria. Not The American Average cuts the bullshit and calls out a love rat – we’re willing to bet this is a true story from the band’s hedonistic days. The album it came from, Stand Up And Scream, blew the cobwebs off the bold and abrasive side of metalcore and injected a heap of adrenaline into the 2009 scene.

Ferocious, incendiary and ball-breaking, Closure is the height of brutality for Asking Alexandria. Reckless And Relentless was a fitting album title that this humble cracker of a track comes from – there’s nothing quite like AA’s interpretation of modesty. Complete with a melody that neatly controls their signature rage, Closure strongly confirms these five guys are an utterly bonkers yet brilliant instrumental powerhouse.

This slow number from third album From Death To Destiny was to be the last single before Danny’s departure, and what a note to go out on. There’s an admirable sincerity and vulnerability to Moving On, a welcome change to their trademark vitriol. It turned out to be their most successful US chart climber, swiping sixth place on Billboard’s Mainstream Rock Songs chart. Incredibly relatable and more than capable of drawing a tear or two out of the hardest individual in the crowd, raise your lighters in the air because it’s about to get emotional.

A great example of Danny’s acerbic style, this early anthem proved beyond all doubt that these lads don’t do anything by halves. The raw edges and unbridled guttural tones typical of their debut album Stand Up And Scream take us back to a time when metalcore belted its lungs out without thinking. It’s likely most of your friends plugged A Prophecy into their MySpace page back in the day, so it’s best not to fight the waves of nostalgia it’ll kick up.

Relentless from start to finish, The Death Of Me tells the tale of a band that never sacrificed quality in the midst of a changing scene. Keen-eared listeners will notice the gravelly tones of frontman Danny Worsnop casually elbowing out his signature slick vocals throughout third album From Death To Destiny, but that only adds to the charm of this unashamed banger.

Ever felt like one of your past relationships was toxic on both sides? Killing You knows how that feels, so Asking Alexandria helpfully produced a butt-kicking soundtrack to such testing times. Its parent album From Death To Destiny marks the era of AA realising their errors and emotional weaknesses, and such honesty and sincerity is a rarity in metalcore. We wouldn’t recommend getting romantically involved with these guys if you value your sanity.

A nostalgic earworm from the early Stand Up And Scream days, Final Episode was the start of something special for this five-piece. This may have been a rather average music video, but the accompanying track is an unforgettable classic that shot these five British lads to fame with three little words – ‘Oh. My. God.’