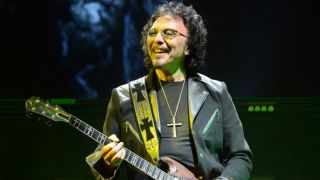 Black Sabbath’s Tony Iommi has revealed the “interesting” way that he discovered his cancer was in remission.

The 68-year-old guitarist, who was diagnosed with lymphoma in 2012 , was presenting the Spire Specialist Care Centre in Solihull with an award this summer when a journalist asked him about his health.

He tells UCR: “It was really interesting how I got the news. I only got it because I was presenting the hospital where I received treatment with an award, and a writer who I was doing an interview with asked me if I was in remission. I turned to my doctor and asked, ‘Am I in remission?’ The doctor said, ‘Yes.’ And that’s how I got to know.”

But Iommi is still cautiously optimistic on his road to recovery. He adds: “I’m always feeling around for lumps and bumps, and so I’m never comfortable. I had a friend that went into remission and she planned a big party, and then the cancer came back. You just never know.

“It’s just one of those things. I certainly didn’t expect it to come out that I was in remission because, well, I don’t know.”

Iommi previously praised the facility where he was treated, saying it was “a warm and welcoming environment.”

He added: “All the staff are friendly and helpful. You can talk to them about any concerns you may have, about your treatment or just about life in general, which is sometimes exactly what you need.

“I can’t thank them enough for what they have done for me, and others like me.”

Iommi and Black Sabbath are currently touring North America on The End tour, finishing in the band’s hometown of Birmingham in February.