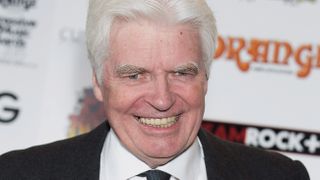 An exhibition featuring the work of artist Roger Dean opens at the Max Museum on the Isle of Man this week.

Dean – best known for his work on album covers by prog giants including Yes and Asia – opens his Islands And Bridges exhibition at the Manx Museum on August 20 (Saturday) and it runs through to November 19.

Also on August 20, the Isle of Man Post Office will launch a set of six stamps featuring images of some of the work from the Islands And Bridges exhibition. A gallery showing the stamps can be viewed below.

And on the same day, Dean will republish his three books Views, Magnetic Storm and Dragon’s Dream – all of which will be available at the museum.

Dean says: “The Isle of Man Post office, Manx National Heritage and The Manx Museum kindly invited me to produce a set of stamps to go with my exhibition on the Isle of Man that opens on August 20.

“It is a small island but within its shores are varied landscapes of great beauty, a gem.”